Wachira Waheire is a human rights activist from Kenya. During the regime of Daniel Arap Moi, he was imprisoned and tortured. He served in Kenya's Truth, Justice and Reconciliation Commission and is today coordinator of the National Victims and Survivors Network Kenya. Waheire participated in the Mandela Dialogues on Memory Work 1.

A place of remembrance is a place of narration and reflection, and thus a crystallisation point for societal change, as Wachira puts it: "We should build a society, where people are willing to reconcile, are capable of dissent but are tolerant to one another, despite our differences." The absence of a place in Kenya to remember the repressive period when the Moi-KANU regime was in power weighs heavily for Wachira. For many years, his means and the government’s support haven’t been sufficient to realise the kind of Memory Centre he envisions.

Participating in the Mandela Dialogues, he found inspiration, understanding, and mental support for his project. He decided to venture a first step and, for the time being, founded a virtual memory centre which is there for all Kenyans; both old and young, victims of human rights violations, government institutions, and non-governmental organisations who are concerned with issues of transitional justice or the examination of infringements of human rights.

After overcoming many bureaucratic hurdles, the Centre for Memory and Development has been officially registered in Kenya and is led by a board of five members comprising of three survivors of torture, a lawyer, and a media expert. Thus the path is now cleared for content work. This involves, in the first instance, a campaign and advocacy for the establishment of a torture monument in the basement of a government building called Nyayo House in Nairobi, as well as preparations for the publication of the large amount of information material gathered locally and internationally. The Centre for Memory and Development will also organise public dialogue events at universities on subjects such as nationhood, pluralism, devolution, and political leadership.

Support comes from the other Mandela Dialogues' participants, whom Wachira is still well connected with. They exchange information and regularly consult and obtain advice for their work. Waheire then feeds these insights into his own network, reaching activists and victims in Kenya and the neighbouring countries.

The Nyayo House Torture Chambers are the former state-built torture chambers constructed in the basement of a 26-story government building situated in the Central Business District of the city of Nairobi, Kenya. The construction of the Torture Chambers was completed in the early 1980’s when former President Daniel Arap Moi was in the process of consolidating and entrenching his rule after an attempted coup against him in August 1982. The aftermath of the coup attempt saw the arrest and imprisonment of many university students, lecturers, journalists, and civilians over alleged complicity in the coup attempt. Those arrested suffered extreme torture and dehumanization, all because they were fighting for the human rights of all Kenyans.

For years, survivors of the Nyayo House Torture Chambers have been fighting for the site to be transformed into an official site of memory, in fulfillment of an array of government promises and the recommendations of Kenya's Truth, Justice, and Reconciliation Commission. To date, they have been unsuccessful. For more information, please watch the following video (approx. 6 min.): 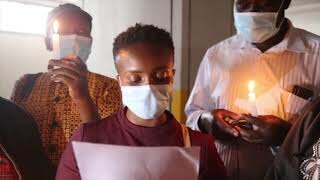 “I deepened my understanding of how memory work can be used to transform and build democracy. So that people can dialogue over their past with a view to learning from the past, and avoiding the things they went through in the past to build a better future.”